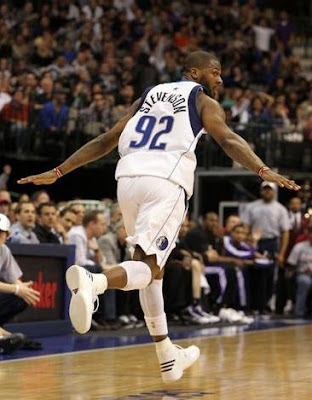 Irving police were called to the Grand Venetian apartment complex at about 10:30 p.m. CT after receiving a call to report an intoxicated person walking in the area. Officers reported that Stevenson, who does not live at the complex, appeared intoxicated and did not know where he was.

Stevenson told Dallas TV station KDFW he was in the parking lot looking for his phone after doing some celebrating at a friend's apartment.

"A couple cops came up to me, asked me was I drunk," Stevenson said. "I said no but I had a couple drinks. I guess he talked to somebody else and then he just put me in handcuffs for no reason."

Stevenson still played a key role in the series, averaging 7.0 points in 17.2 minutes while making 13-of-23 attempts from 3-point range and playing excellent defense on Miami superstars Dwyane Wade and LeBron James.

Stevenson drew attention during the Finals for making critical comments about James, with whom he has feuded since they battled in the Washington Wizards-Cleveland Cavaliers playoff series from 2006 to 2008. Stevenson called the Heat "classless" after the Mavericks clinched the title. He had said James "checked out" in Game 4.
DeShawn Stevenson Mavericks NBA