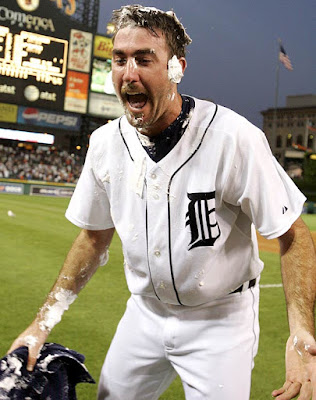 Justin Verlander became the first 19-game winner in the majors Monday night with a strong performance against the Tampa Bay Rays. Verlander struck out eight and allowed three hits over seven innings.

He has now won seven straight starts, the second time this season he's accomplished that feat. He's the first pitcher with a pair of streaks like that since Frank Viola, with the 1988 Minnesota Twins. In that span, he's gone at least seven innings and posted at least seven strikeouts.

According to the Elias Sports Bureau, he's the first pitcher with a streak that long reaching those parameters since Pedro Martinez did so over the 1999 and 2000 seasons, both years in which Martinez won the AL Cy Young award.

Verlander joins Martinez and Greg Maddux as the only pitchers in the divisional era to post a WHIP of less than 0.90 (minimum 20 decisions).

Also according to the Elias Sports Bureau, Verlander is 18-0 this season when the Tigers have scored at least three runs in his starts.

The last pitcher to finish a season 18-0 or better in games in which his team scored at least three runs was Martinez (19-0 in 2002 in starts when the Red Sox plated more than two runs).
Justin Verlander MLB Tigers