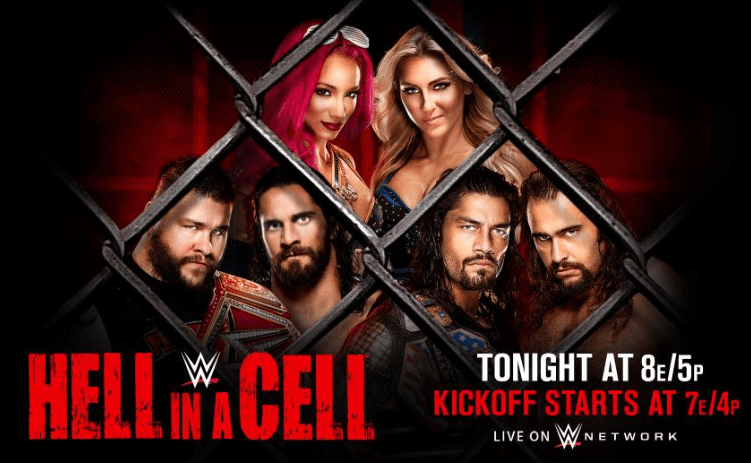 WWE Hell in a Cell Results:
– Kickoff Match: Cedric Alexander, Lince Dorado and Sin Cara defeated Tony Nese, Drew Gulak and Ariya Daivari. Alexander pinned Gualk after a Lumbar Check.
1. Hell in a Cell Match for the United States Championship: Roman Reigns (c) defeated Rusev. Reigns escaped a chain-assisted Accolade on steel steps and was able to hit a spear to pin Rusev and retain the United States Championship.
2. Bayley defeated Dana Brooke.Bayley won by pinfall with a Bayley-to-Belly.
3. The Club defeated Enzo Amore and Big Cass. Karl Anderson pinned Amore after a Magic Killer.
4. Hell in a Cell Match for the Universal Championship: Kevin Owens (c) defeated Seth Rollins.Chris Jericho got into the cage, repeatedly interfering and pulling the referee out of the ring before he could count three for Rollins. Rollins tried to take out Jericho with a powerbomb into the cage wall. Rollins managed to kick out of a pop-up powerbomb and fight back through multiple 2-person chair attacks, but was finally caught with a DDT onto a chair followed by a powerbomb through two chairs for the loss.
5. Cruiserweight Championship Match: Brian Kendrick defeated TJ Perkins (c). Kendrick faked an injury, drawing Perkins in to hit him with a headbutt and lock in the Captain’s Hook for the submission victory. Kendrick is the new Cruiserweight Champion.
6. Tag Team Championship Match: New Day (Big E and Xavier Woods) (c) defeated Sheamus and Cesaro by disqualification. Cesaro caught Xavier Woods in a Sharpshooter. On the outside while this was going on, Sheamus hit Big E with Woods’ trombone. Kofi Kingston fought back by hitting Sheamus with Trouble in Paradise, but the referee saw it and called for a DQ. As the ref was calling for the bell, Woods tapped out.
7. Hell in a Cell Match for the Raw Women’s Championship: Charlotte defeated Sasha Banks (c). The match started with a brawl outside the cage, ending with Sasha Banks being powerbombed through the Spanish announce table. She appeared injured and was about to be taken out on a stretcher, but refused and ordered the referee to start the match anyway. At the end of the match Sasha went for a running powerbomb through a table, but her injured back gave out. Charlotte tossed Sasha into the table twice, then hit Natural Selection for the pin. Charlotte is once again Raw Women’s Champion.