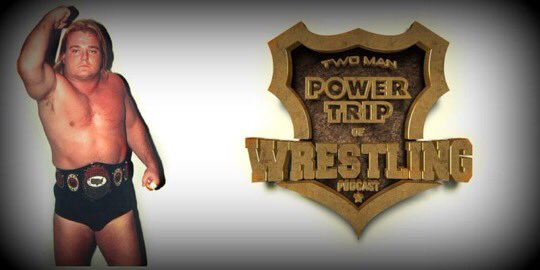 Join Chad and John Poz for today's podcast episode #232 which is also the two year "show anniversary" of The Two Man Power Trip of Wrestling as they welcome WWE Hall of Famer and former WWE Tag Team and Intercontinental Champion, Greg "The Hammer" Valentine. In the following excert Valentine breaks down his feelings on the current wrestling scene, who he personally likes to watch and whether or not today's competitors could handle "The Hammer". The full episode can be downloaded at the following link.


Greg Valentine On His STIFF Matches And Feud With Ronnie Garvin:


Greg The Hammer Valentine On Today's WWE, Who He Watches, No Psychology:


Could today's WWE Superstars handle the stiff and hard hitting in-ring style of "The Hammer":

"I'm sure they could. These guys are all in great shape, they are muscle bound and they go to the gyms all the time. But they started that criss-crossing and running and I would just stand there in the corner and say come to me. It is not about running around, jumping over guys and jumping off the top rope. I never had to wrestle like that. I see a lot of that stuff and I respect that stuff and respect the athleticism but that is not the kind of wrestling that I like or even watch. If I see it, I watch the product now and then and if I see a wrestling match I'll watch it but I see if they are actually wrestling because I hate all that running stuff. I come from the generation where you make it look like a real fight and (laughing) if you've got somebody down and you get up to start criss-crossing around the ring than what kind of crap is that?"

"Going off the top rope that is athletic too and I hardly ever did it in my career and I didn't have a problem getting booked. The thing is and I am totally old-school but I am even older than old school because I came up being raised by Johnny Valentine. He could go out there and lay on a headlock for twenty minuets and turn around and grab a guy's arm for another twenty minuets and he'd have people rioting and trying to get in the ring, so it is like a psychology thing. You don't have to play to the crowd for every kind of pop. You've got to just have that psychology and make it look real and you won't have a problem with it. A lot of people have a problem with that believe it or not."


Is there anybody on the WWE roster that he does enjoy watching:

"I guess because of his Dad and I know the kid real well is Randy Orton because he is old school and it is born into him but I haven't seen much of him lately since he's been in this tag-team thing. I do enjoy the Wyatts because they are so bizarre and actually since the main guy is Mike Rotundo's son. There you've got more second generation stuff in there too or third generation as it is with Randy Orton. It is good to see stuff like that and it is entertaining to me with the Wyatts and how they do all of that."


Too many television shows lessening the value of a match:

"I had so many matches that were literally dog-figts. Like with Ronnie Garvin and Ric Flair and (Roddy) Piper and Tito Santana and even me and Beefcake against The Bulldogs. These were competitive matches and I think they blow away anything that you really see nowadays except for maybe the main event at WrestleMania each year. There are a lot of good matches still out there but we blow a lot of that stuff away. They are also now up against three hours of Monday night TV and are up against two more hours on Tuesday night and the product is watered down. They've got so much stuff going on that how are they going to come up with anything original and that is why they talk so much. I'd hate to have that headache of what am I going to after a Monday Night Raw and already thinking what am I going to do next week? It is just way too much television and they also have the pay per views each month. Good God."


His incredibly stiff feud and matches with Ronnie Garvin:

"He had nobody to work with when he came into New York. At the same time I was supposed to and did an angle with Don Muraco where I put the figure four on Superstar Billy Graham. I was all ready to go against Don Muraco and when we all went to Europe a bunch of people got fired and Muraco was one of them and I went to Vince and said well can you hire him back? So that is where Ronnie came in and he was just looking around at guys because he was stiff too and in order to get over you've got to have a guy that will take the punches and I was the guy."

"It was a great angle. He came out and refereed matches with me and cause me to lose and I'd beg Jack Tunney (The President of the WWF) to reinstate him and it was a great angle. We beat the hell out of each other. But we loved it and that was the way we worked. I would watch Ronnie Garvin and Ric Flair down in the NWA just chopping the hell out of each other and I knew what Ronnie was all about so we loved it."


All of the past interviews from The Two Man Power Trip of Wrestling can be found by subscribing to us on iTunes, Podomatic, Tune-In, Player FM as well as visiting our website www.tmptofwrestling.com. Also follow us on Twitter @TwoManPowerTrip