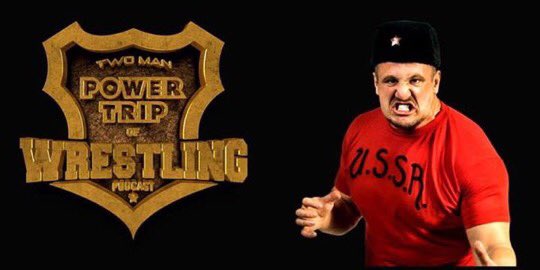 Earlier this week Nikolai Volkoff appeared on episode #236 of The Two Man Power Trip of Wrestling. You simply cannot talk about Volkoff’s run as one of the top “bad-guys” in the WWF without bringing up his tag team partner, The Iron Sheik. In the following excerpt Nikolai discusses why he and the Sheik gelled so well while being complete opposites outside the ring. Nikolai also discusses the run of the Bolsheviks in the tail end of the 1980s as well as the end of his WWF tenure which saw him join Ted Dibiase’s Million Dollar Corporation. The full interview is available for download at this link.

Being paired with The Iron Sheik:

“Me and Sheik was like an odd-couple. Sheik loved to party and loved to drink, I don't like to party and I don't like to drink. I just loved to come here and I tried to make America my dream and my dream came true. I want to save money when I make it so I can save some of it for when I retire and stay healthy. When you party and you don't take care of yourself, you cannot take care of your body either. Sheik as a person is a beautiful person. He has as big a heart as his whole body. Me and Sheik sometimes we would go our different ways but we never had an argument. I respected him and he respected me."

A favorite road story traveling with The Iron Sheik:

"We were in Los Angeles and our show finished up in the night time at like 10:30-11:00 PM and we had a late flight to New York. We tried to make it to the airport and there was not much time, sometimes we had to change our clothes in a taxi and take it right to the airport. But one night Sheik had a lot of Iranian friends there in town...Sheik had his own people take him right to the airport so we went our separate ways. I was in the airport and like ten minutes before the flight I look over and see a bit of confusion at the main doors of the airport and we see The Sheik and he has on his wrestling boots and wrestling gear and he is screaming "stop the plane, stop the plane" and people didn't know what was going on and thought it was someone crazy trying to do something bad and I said it is just Sheiky late for his flight and can somebody please help him. He ended up making the flight and everything was okay." But just seeing him coming and yelling "stop the plane, stop the plane" (laughing) was unbelievable.

“Boris was another nice guy, a really nice guy. I just saw him a couple of weeks ago at a big convention in Philadelphia and we were able to sit at the same table. Boris was there and I almost didn't recognize him. He has lost lots of weight and has long hair and a big beard but he is still the same guy.”


Becoming a baby-face after years of being a hated villain:

Yes and it was the time to switch over because like I said the times change, The time was changing and communism was finished and Russia kind of let the countries have freedom (like the Ukraine, Lithuania) so communism was gone and that was that.

It was a different role and you have to bend with it or otherwise they will blow you away. If you like it or not if you don't bend with the wind, it will knock you away. It was a New Generation of wrestling. They had lots of young kids and it was good. I still go there today. I was at the last couple of WrestleManias and I enjoyed it and it is still one of the biggest shows on earth.