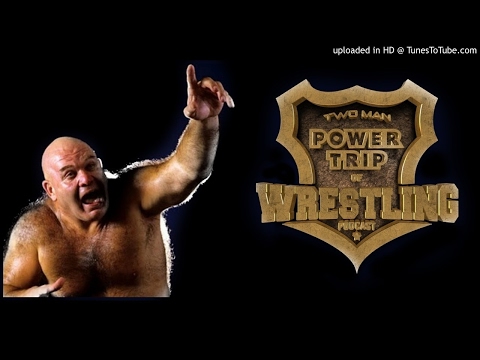 Contained in this message you will find clips from the Two Man Power Trip of Wrestling podcast featuring two classic interviews conducted with George Steele and Ivan Koloff. These interviews have been lost in our archives and we are releasing clips to the public again to share the legacies of these timeless performers in their own words.

We conducted an interview with Ivan Koloff in March 2015. Here are some highlights in video form. Also comments by fellow Russian's stable member "Krusher Krushev" AKA Demolition Smash Barry Darsow.


Ivan Koloff's Legacy In Wrestling In His Own Words:


"I suppose probably that the enduring part no matter what territory I went in I ended up being successful. It is just that idea of the big win (against Bruno) I guess because that had to be the most thing that people associated me with right away. Now, that is probably first and probably second is my run I had with Nikita (Koloff). That was really entertaining to the people and they really enjoyed that I think"


Ivan On The Night He Defeated Bruno Sammartino for the WWWF Championship:

We conducted an interview with George Steele in April 2015. Here are some highlights including the origin of the green tongue and the turnbuckle bite gimmick. The audio clip is his legacy left in wrestling in his own words.


George The Animal Steele's Legacy In Wrestling In His Own Words - April 2015:


Origins of the green tongue:

Today the WWE sits down and come up with all these ideas and different gimmicks and they didn't do that back then. I had a couple of drinks at a TV taping and I didn't want the promoter to know it, so I put some Clorets in my mouth and went on television. Now back in the late 60s - early 70s, color TV had just come out, so here I come out there looking like a clown with a green tounge and I didn't even know it was green, I was just trying to get rid of the breath and about 3 months later I said I wanted to try the green tounge thing again but just for my own laughs. When I did it again, the place went nuts and the next day had signs all over the place with green tounges hanging out so from then on I had the very best breath in wrestling.

In Pittsburg back in 1967, they would give away different gifts to get fans to come to the TV shows and on this one particular time they gave away these small little couch pillows. They had probably given away about 250 of them. One of the ladies in the crowed had gotten mad at me and threw her pillow at me. So I get the pillow in the ring and what am I going to do with it? I can throw it back and then have 250 pillows then coming back at me or I can take a bite out of it. So I take a bite out of it and it tore and popped because it was so packed with the stuffing, it just exploded so I started throwing the stuffing in the air and it was sticking in my hair like an abominable snowman, then I took the pillow wrapped it around my opponents head and started choking him. It was Bruno's (Sammartino) wrestling "cousin" Tony Marino that said maybe you should start tearing the turnbuckles and everybody laughed. Two or three weeks later I go and fight (Chief Jay) Strongbow and even though it’s hard to have a boring match with Strongbow the people just weren't reacting to this match. I looked at the turnbuckle pad and I went over took a bite out of it and it tore really easy and started rubbing his eyes with that and for a very flat match, we had a riot. So the two things that I am known for the green tongue and the turnbuckles and they both happened by accident.