Episode #5 Of The Triple Threat Podcast ft. @TheFranchiseSD & the @TwoManPowerTrip 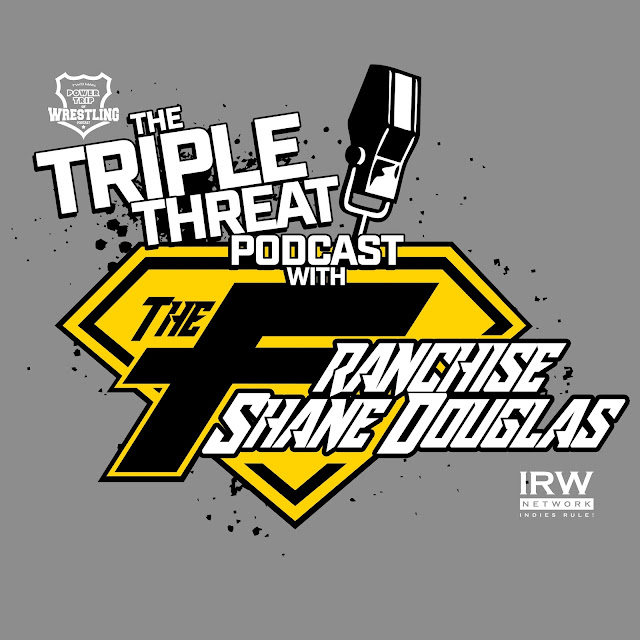 Episode #5 of The Triple Threat Podcast featuring "The Franchise" Shane Douglas and Chad and John Poz of The Two Man Power Trip of Wrestling is NOW available and streaming on the IRW Network. In this except Shane Douglas discusses President Donald Trump vs. CNN, John Cena stealing the "franchise" moniker and relives ECW's Halloween Hell 1997.


Shane Douglas On President Trump vs. CNN, Is Trump Calling For Violence?:


His response to John Cena dubbing himself "The Franchise":

"Like I've said before with other similar topics. I see a lot of this as homage. We all go to our grave thinking that we will never be forgotten and we are forgotten ten minuets later. So when somebody does that there is a bit of homage to that. But, I will say this and first off there are copyrights involved and secondly I never portended in my career that I wanted to be the next "Nature Boy" Ric Flair or "Living Legend" Bruno Sammartino, I wanted to be the first Shane Douglas and as naive as that sounds coming into the industry I truly wanted to make my way in the industry and I didn't want to be another of this or that and be another "Road Warrior" or Sting or another Undertaker I wanted to be the first me. When you first come into the industry you never have the gonads to believe that is possible and when you start to work your way up the ladder and you start to become a little more aquatinted with your industry and a little better in your performances than you start to get the feel that maybe and for me it was probably 20 years into my career when I finally realized it. To this day I don't put myself on anybodies level before me because to me Ricky Steamboat is way above me, Ric Flair is way above me, Arn Anderson is way above me, Harley Race is way above me and I look at them in that way because that is the fan or the "mark" in me that came into the industry looking up to those guys. In hindsight and to encapsulate my career and look at is as an embodiment of a career I can look at it and I can see how fans where the fan could get excited over that."

"John Cena's name is already universal enough. Kudos to him for that. He's worked his ass off and he deserves that but to suddenly start saying that I am going to start calling myself the "8th wonder of the world", Shane Douglas or "The Living Legend" Shane Douglas or whatever just fill int he blank. I would be embarrassed. Paul Heyman came to me early in ECW and wanted me to do Ric Flair's chops, his WHOOO and his figure four and I asked Paul; Are yo out of your f*cking mind? I am out here burying him in these promos and now you want me to copy him? I wouldn't have done that in ten lifetimes and the bigger part of the reason for that is "The Nature Boy" Ric Flair had been done to perfection. Troy Martin couldn't benefit what Richard Fliehr had done on that. Buddy Landel (bless his heart) was a great worker and a great guy but he looked like a Ric Flair number 2. Not what Buddy had or what I feel Buddy could have become."

"When I got the name "The Franchise" the gimmick and turned it into what it became, I put my heart and soul into that. Looking back from where I sit on my couch I am proud of what I accomplished at that and what I did with that and what we did with that. I am embarrassed that someone of John's status and stature would think that maybe he'd start calling himself that. It is a little bit too late for that and I don't for a second feel that John is being disrespectful in doing it my guess is he is being told to do it. Whether it is or isn't John's name is already universally known and there is no reason to start calling myself "The Human Suplex Machine" Shane Douglas in 2017 because Taz did it well or "Homicidial, Suicidal, Genocidal" it has already been done by Sabu. A bit of me says homage but if John starts to take that to a point of calling himself that weekly than I think that would shadow very poorly on John."


His personal interactions with John Cena:

"The few times I've met John I've gotten along with him great, so my guess is that the company is calling him that and not John. Either way, I never personally wanted to be the second anything, I always wanted to be the first "Franchise"."


The fan reaction supporting him as the ONLY "Franchise":

"It makes you proud in a sense because after a whole lot of years in this business that the fans get it. A young kid from New Brighton, Pennsylvania broke into the business and his Daddy, his Uncle or his brother wasn't a well connected promoter or wrestler in the industry and I've fought for everything that I've gotten. Nothing was given to me and for that the fans that identify that and go on Twitter and social media and say those things to me is very humbling and I thank every fan out there for it."