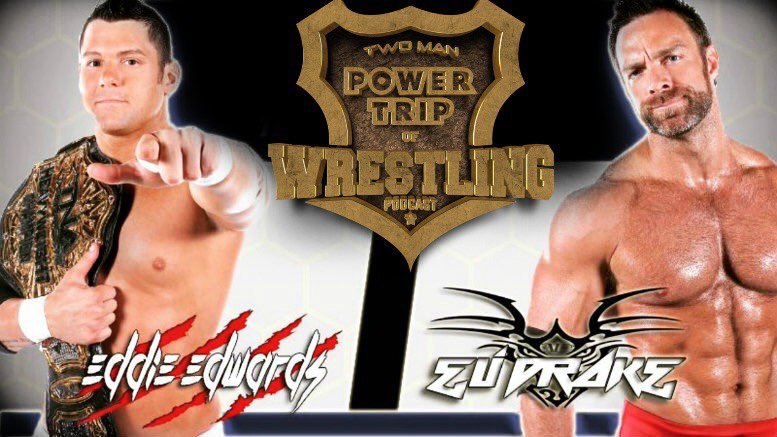 HUGE double shot of IMPACT Wrestling superstars as we welcome former IMPACT Wrestling World Champion, Eddie Edwards and "The Namer Of Dummies", Eli Drake. Catch IMPACT Wrestling's SLAMMIVERSARY on Sunday, July 2nd LIVE on Pay Per View. In this excerpt, Edwards discusses his match with former partner Davey Richards, the inclusion of both of their wives into their feud and his singles career in IMPACT Wrestling. The full episode can be downloaded at this link.


Eddie Edwards On IMPACT's Changes, Future Of The Company, Slammiversary:


Eddie Edwards On What It Meant To Win The IMPACT World Championship:


The hype behind Slammiversary and his Full Metal Mayhem match:

“It is such a big event and it is something that the boys in the back, the office and the fans we all are trying to bring something extra and something special because you can feel it in the air that this is Slammiversary and it is the 15th anniversary of IMPACT Wrestling. We want to go out there and represent the company and put on a show. As far as my match, I am excited and looking forward to it of course but I'd be lying if I didn't say I am a bit (not nervous) but I have the butterflies of it being a big match. There are a lot of risks that go into a match like this (obviously) and having my wife by my side, I'm obviously concerned for her well-being. When you go into a match like this you already know there will be bumps and bruises and the next day you are not going to be feeling normal."


Is adding the wives into his feud with Davey Richards a big obstacle in settling their differences:

"It has taken that next step. People have seen the two guys go against each other and where anything goes and we've had street fights between myself and Davey and Last Man Standing matches but like you said when you add the wives it is an x-factor. It is something extra that you don't know what to expect and people don't know what to expect and I think it adds an element of intrigue. It is also something that I feel like fans can relate to because we've all been in relationships and you can imagine how I feel about Angelina (Love) attacking Alisha. So I think people can relate to it and it is a whole new level for us to go and we get to see what else we can do and what else we can create with what we have. So far I have really enjoyed it and I am really proud of what Alisha has done and brought to the table and Angelina has brought some good stuff to the table."


What does he feel was the catalyst for his brutal feud with his former partner:

"I think there is a lot of things that go into it. I think the biggest factor is somebody who goes by the name of Angelina Love. That would be the biggest factor in all of this and by putting thoughts and ideas into his head. Maybe they were there on his own but I think she was the force behind it all."


How did the recent tour of India help IMPACT Wrestling build towards Slammiversary:

"It was great and it was something that obviously I never expected to be able to do and to be able to go over to India and see the country and meet the people and be able to wrestle in front of that audience was something unique and something special. It is a once in a lifetime opportunity. I think everybody felt the same thing going into it as far as the wrestlers and the office that does go out there and shows the fans what we can do and what we are trying to do and those fans brought it and gave it right back. Those fans were insane and it was awesome feeling it."

"The build up from the whole company and to have the last couple of shows leading in be done over there and with the fans following along and following the product was cool to see. The story lines are going forward and the people are following along episode by episode so I think we are right where we need to be right now heading into Slammiversary."


Winning the IMPACT World Championship from Bobby Lashley in October 2016:

"Obviously, as far as being a little bit selfish it was an awesome moment for myself. It is obviously why we get into wrestling, we get into it to be the best in any company we go to and be able to win the World Title is what it is all about. To be able to go out there and against an athlete the caliber of Bobby Lashley and to be able to beat him and hold that World Championship in the middle of that ring was surreal. It was something that I wanted to do like I said but you never know at some point because there are ups and down and sometimes you don't know if you are going to get there. At that moment when I was in the ring and I held that title and Brian Hebner raised my hand at that moment it is all worth it. The injuries, the travel, losing sleep, the missing out on family obligations is all worth it at that moment. For me it is something that I will never forget and hopefully the fans as well feel the same way."


Was he made aware ahead of time by management he was winning the World Title:

"It may be a big cliché and maybe it has been said before but I didn't know until I got there. I had no idea. There were rumblings that they were going to do some cool stuff at the tapings and that we were going to have some fun and when I got word I was like; What? It was a shock to me and I can only imagine how it was for the people watching."