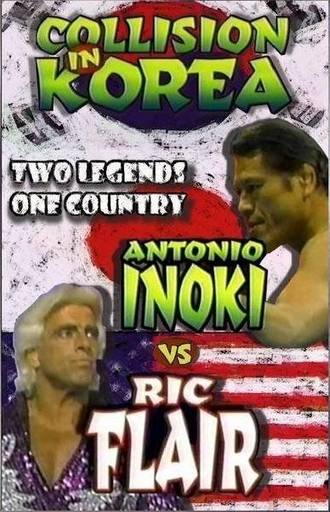 
Highlights of the two cards were shown on pay-per-view on 8/4/95 with Eric Bischoff, Mike Tenay, & Mr. Ishikawa (Sonny Onoo) on commentary

Collision in Korea, officially known as the Pyongyang International Sports and Culture Festival for Peace (平和のための平壌国際体育・文化祝典 Heiwa no tame no Pyon'yan kokusai taiiku bunka shukuten?),[3][4][5] was the largest professional wrestling pay-per-view (PPV) event in history. It was jointly produced by World Championship Wrestling (WCW) and New Japan Pro Wrestling (NJPW), and took place over a period of two days on April 28 and 29, 1995 at May Day Stadium in Pyongyang, North Korea. It aired in North America on August 4, 1995,[6] when WCW broadcast a selection[7] of matches from the show on pay-per-view.

NJPW's Hidekazu Tanaka was the ring announcer for the show, while Masao Tayama and Tiger Hattori refereed the matches. Commentary for the WCW pay-per-view presentation of the event was provided by Eric Bischoff, Mike Tenay and Kazuo Ishikawa.

It is currently one of the few WCW pay-per-views not yet available on the WWE Network.