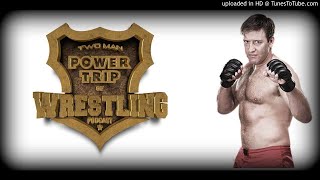 Earlier this week The Two Man Power Trip of Wrestling welcomed "The American Psycho", UFC Hall of Famer - Stephan Bonnar. Bonnar details his match teaming with fellow UFC Hall of Famer Phil Baroni at Smash Mouth Pro Wrestling’s “Fight of Flight” in Valpraiso, Indiana on Sunday July 16th. He also discusses why he has dabbled into professional wrestling and why he feels he is a natural for the industry. The full episode can be downloaded at this link.


Stephan Bonnar On If CM Punk Will Ever Have Another UFC Fight, Punk's Promo Skills Outside Of Wrestling:


Moving into pro wrestling and the catalyst for the transition:

“Dave Bautista did an MMA fight and I helped him train MMA and here he is WWE's Dave Bautista and now he's doing the Guardians of The Galaxy movies now but a few years back and just like with me with pro wrestling pretty soon I'd be too old to try it and he wanted to train for an MMA fight and we put together a training camp. But I had never done it. I got invited to do this Smash Mouth Pro Wrestling show on April 8th in Valpraiso, Indiana right next to my hometown of Munsey and I got to go home and see my family go there and do a battle royal and it was fun. The promoter Jeremy wants to have me back and I told him that I just started training and after I did that show and battle royal match I went to a pro wrestling gym and really started training.”

“For me it is so much harder. Yesterday, I went to an MMA gym and sparred a little and that is like walking for me. This stuff is more like dancing whereas fighting is more freestyle rap, this is like a little dance that with choreographed moves and maybe it is just easier for me to go in there and fight and spar and make sh*t up as I go along but they say with the old time wrestlers that is how they did it."


Getting bored with MMA training and embracing pro wrestling’s history:

“It is fascinating and hearing all these old stories and I am watching old matches and it is kind of fun. I am learning again and mentally I am stimulated. When you fight for so long and like I said it is like walking and you go in and spar and don't think about it and since this is new it is stimulating and you need that. I was going into to workouts at MMA gyms and just thought what am I doing? I am sick of this and I retired so what is the point? Now I go there to get some sparring, get a sweat on, good cardio and stimulate my mind by learning to pro wrestle and that is where I escape to."


Is he looking forward to using his gift of gab on a pro wrestling microphone:

"In MMA you have to cut promos for real and you have to let everyone know that you can kick this guy's ass and it is a real fight. I think it is harder in MMA to cut real promos because it is all real and a perfect example of that is CM Punk.”


What he didn’t like about CM Punk’s MMA debut and will Punk fight again in UFC:

“I am a huge CM Punk fan and you'd think he is one of the best guys all time on the mic and his promo skills are second to none yet in MMA and I'm not saying this to be disrespectful but he is just boring. I think he can still be respectful and entertaining and cut MMA promos about tuning into his upcoming fight and what people can expect. I looked forward to seeing what CM Punk had to say about his upcoming fight and I was like good God that was boring. He doesn't have to be over the top or be "pro wrestling" and turn “heel” and be disrespectful but I was disappointed because he's got more than that."

"But he is new and I am sure if he did MMA ten more years he would loosen up. It was tough what he did. Even Brock Lesnar had the sense to take a couple of tune up fights before the UFC because it is a tall task for anyone. Honestly, what would the UFC even do with him? Unless they match him up with someone like a Phil Baroni who would be the perfect fight for him. He got a 25 year old guy that was 6-0 or something and that is not the best fight for him."


Using a pro wrestling style “masked man” angle to build up his fight with Tito Ortiz at Bellator 131:

“The mask was all (Justin) McCully's idea. I had no interest in fighting again but when I do interviews and people ask who would you want or is there one guy you'd like a chance to fight it was Tito. I never really cared for him to be honest with you. I thought when he gave Ken Shamrock the finger after the Guy Mezger fight, I thought that was disrespectful, wearing the "I Killed Kenny" shirt and my last UFC manager used to manage him and he said he screwed him over and I just heard about his character from a lot of people.”

“They offered me the fight and at first they asked if I wanted to fight for them and I said no. They said do you want to fight Tito and I didn't even think about it for a tenth of a second and before I could think about it the words yes just came out of my mouth. McCully got in touch with me and I remember I saw Tito in his corner for his fights and him in Tito's and Tito screwed him over and never paid him so he wanted to help me for the fight. My whole theory was that I was going to turn heel and I really felt like if you were stupid enough to be a Tito fan than he can have you."

“Once again back to Phil Baroni and I was doing an interview with him and got the same question. It is getting the WWE World Heavyweight Title so it is Brock Lesnar, Bobby Lashley, Barnett is doing it now so those are all three dream matches.”