Episode #10 of The Triple Threat Podcast ft. @TheFranchiseSD & the @TwoManPowerTrip 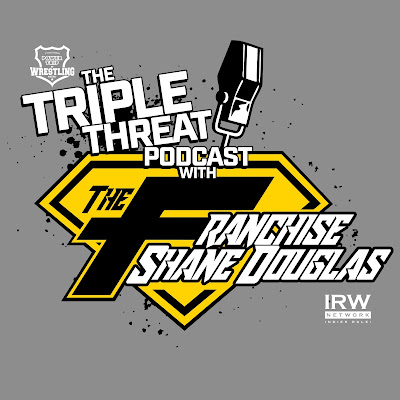 Episode #10 Of The Triple Threat Podcast featuring "The Franchise" Shane Douglas and The Two Man Power Trip of Wrestling is NOW available and streaming on the IRW Network. This week, Shane, Chad and John Poz discuss the emotional weekend spent at the ECW Arena by the entire show team and Shane's extremely passionate promo before House of Hardcore this past Saturday night and how in 2017 the spirit of ECW is alive and well. We also discuss the frantic situation in Charlottsvillie, Virginia and the impact felt across the country and you DO NOT want to miss Shane's comments on the medical condition of Ric Flair and the very heartfelt words Shane has for "The Nature Boy."

"Any wrestling fan knows the differences that he and I have had, professional differences. But my Mom used to say with age comes wisdom and you don't get to be 52 without living it and so for me as that young kid that really felt put upon by Ric Flair and spewed a lot of that venom, a lot of that anger still resides inside me but that is professional differences. But on a personal level I don't wish that on anybody. I have seen enough people in my business die that I don't sit back and hope that this one or that one goes but not the other guys. I don't want to see anyone of these guys die. When you hear someone who is so iconic and so impactful on the industry that I made my professional life in such as Ric Flair, he is one of the giants. I wrestled with it for the better part of the afternoon with do I post some personal comments and invariably I came back to (and for the people out there) that find sport in trolling I didn't want to provide any fodder for that and take the eyes away from Ric's recovery."

"I wish him the best of luck in his recovery and I really do hope that Ric makes a full recovery and can enjoy his life for decades to come. It would be a HUGE loss to the wrestling industry and for those of us that have made our living in this industry to lose someone like Ric Flair. With that said, as much positive thoughts and energy that I can send out there for Ric goes out. My personal differences and professional differences aside with him I still look to him even through all of that I looked up to Ric as a measuring stick in the business and I wish him all the best in recovery."