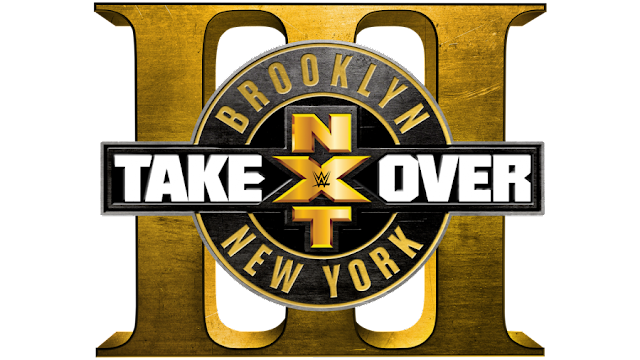 NXT TakeOver: Brooklyn III Results:
Play
Current Time0:00
/
Duration Time0:00
Progress: 0%
0:00
Fullscreen
00:00
Mute
— The show opened with Code Orange performing “Bleeding In The Blur” live inside the Barclays Center.
1. Andrade “Cien” Almas defeated Johnny Gargano. Gargano was about to put Almas away with a until Zelina Vega threw a #DIY T-shirt into his face, allowing Almas to connect with a dropkick followed by a hammerlock DDT for the victory.
— The camera cut to a skybox containing Raw GM Kurt Angle, Smackdown GM Daniel Bryan and a slew of NXT talent, including the Iconic Duo and No Way Jose.
2. NXT Tag Team Championship Match: SAnitY defeated the Authors Of Pain (c). This match featured Corey Graves on guest commentary. Both teams brawled before the match even started, with Authors Of Pain eventually clearing the ring. Though originally not scheduled to compete, SAnitY’s Eric Young switched spots with Killian Dain (who had yet to be tagged in) mid-match. Later, Dain put Akam through a table on the outside of the ring after Akam had caught Nikki Cross mid-flying crossbody, allowing Wolfe and Young to hit Rezar with flying neckbreaker for the pinfall victory.
— After the match, Bobby Fish and Kyle O’Reilly, collectively known as reDRagon, hit the ring and beat down both SAnitY and the Authors Of Pain.
3. Aleister Black defeated Hideo Itami. This match featured Jim Ross on guest commentary. Aleister Black was played to the ring by Code Orange featuring the frontman of Incendiary. Early on in the match, Itami busted Black open, possibly breaking his nose. After a hard-hitting match, a bloody Black won after connecting with a sudden Black Mass kick.
4. NXT Women’s Championship Match: Asuka (c) defeated Ember Moon. After a series of very close near-falls on Asuka, the women’s champion was able to catch Ember Moon in the Asuka Lock and force her to tap out. Asuka remains undefeated.
5. NXT Championship Match: Drew McIntyre defeated Bobby Roode (c).McIntyre was led to the ring by the New York City Police Department Emerald Pipes & Drums. McIntyre connected with a Claymore, but Roode was able to get a foot on the rope to break up the pin. Later, McIntyre attempted the Claymore again but was countered into a spinebuster by Roode, who hit a Glorious DDT shortly thereafter, also for a two count. Roode connected with a second Glorious DDT, but then McIntyre reversed a third Glorious DDT attempt into a Claymore for the victory.
— After the match, McIntyre was beaten down by reDRagon and a debuting Adam Cole. Cole posed with the NXT Championship as TakeOver went off the air.