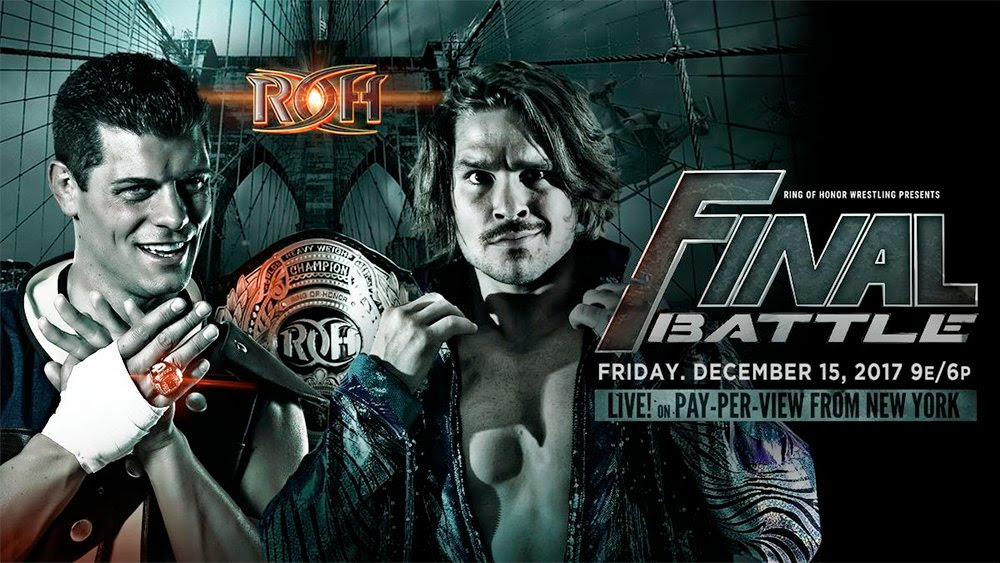 Matt Taven def. Will Ospreay
War Machine def. the Addiction with a tandem top rope leg lariat/slam
Jay Lethal def. Marty Scurll with a low blow followed up by the Lethal Injection
The Motor City Machine Guns (c) def. the Best Friends to retain the ROH Tag Team titles after Chris Saban is able use his momentum from a piledriver from Chucky T to deliver a jackknife pin to Barreta
Silas Young def. Kenny King, Punishment Martinez, & Shane Taylor in a Four Corners Elimination match to win the ROH Television title. He picked up the win when he hit Misery on Punishment Martinez for the final elimination.
The Briscoes def. Tommy Dreamer and Bully Ray in a New York Street Fight Bully was setting up the table by pouring gasoline on it before putting Jay Briscoe through it. However Mark Brisco delivered a kick to Bully and Dem Boys delivered a 3D to Bully. The table didn’t break so Mark also delivered a top rope elbow that drove Bully through the table.
The Young Bucks & Adam Page def. Flip Gordon, Dragon Lee and Titan vs. to retain the ROH Six Man Tag Team championship with a double Indy Taker/Rite of Passage. After the match, Scorpio Sky and the Addiction attack both teams. Looks like Scorpio and the Addiction are a trios team with eyes on the 6-mans.
Dalton Castle def. Cody to win the ROH World Championship with the Bangarang