Results: TJ Perkins kept doing reversals with Kalisto and tried to roll him up with the tights pulled. Kalisto escaped and turned it into Salida del Sol, finishing off Perkins. After the match, Perkins complained to his partners.

ANDERSON AND GALLOWS VS. THE REVIVAL

Results: Anderson got pinned after suffering a chop block to the leg.

Results: Bobby Roode caught Mojo with a boot to the face when Mojo went for his finisher. Roode then did a tornado DDT variation and pinned him.

Handicap match for the WWE Championship

Results: Sami tried to tag Owens, but couldn't quite make it. AJ threw Sami to the outside and Owens attacked AJ and threw him across the ropes in preparation for the Pop-Up Powerbomb. AJ reversed it into a roll-up pin and retained, while Owens was yelling that he was not the legal man.

THE USOS (C) VS. CHAD GABLE AND SHELTON BENJAMIN

Results: The first fall went to the Usos after sandwiching Gable's head with superkicks. Gable and Benjamin went for their finisher, but Benjamin got rolled up for a pin. Clean sweep. JASON JORDAN AND SETH ROLLINS (C) VS. THE BAR

Results: Jason Jordan took a nasty hit to the head and acted dazed for the rest of the match, meaning Sheamus and Cesaro were able to put Seth Rollins away with their double-team finisher. They celebrated in the ring while Jordan sat on the steps, staring at nothing.

Triple threat for the Universal Championship

Results: Brock knocked Braun out of the ring and then finished off Kane with the F5. Afterwards, Braun started yelling, "YOU DIDN'T PIN ME!" as Brock walked off. 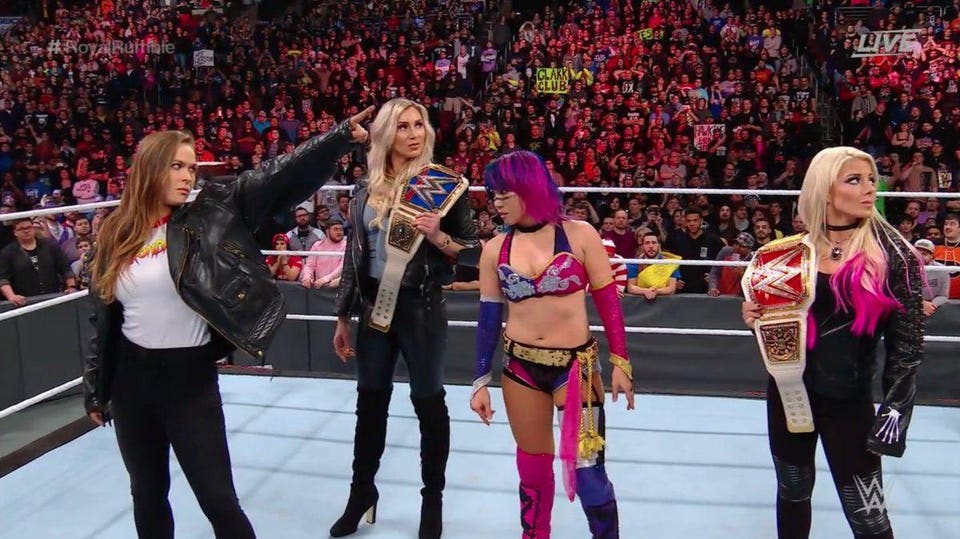 Results: In the end, it was the Bella Twins, Sasha Banks, and Asuka. Sasha had the Bellas help her beat down Asuka, but the Bellas turned on her and threw her out. Nikki then turned on Brie and threw her out. Finally, Asuka and Nikki fought on the apron and while Nikki knocked Asuka onto her back, Asuka was able to kick Nikki's legs out from under her. Nikki fell to the floor and Asuka won.
Afterwards, Charlotte and Alexa Bliss entered the ring to see who Asuka wanted to fight at WrestleMania. Suddenly, "Bad Reputation" started playing and Ronda Rousey entered the arena. Ronda pointed at the WrestleMania sign, then reached her hand out to shake Asuka's hand. Asuka smacked it away, so Ronda pointed back at the sign. She exited the ring and shook hands with a cautious Stephanie McMahon.
The order of entry:
1. Sasha Banks
2. Becky Lynch
3. Sarah Logan
4. Mandy Rose
5. Lita
6. Kairi Sane
7. Tamina
8. Dana Brooke
9. Torrie Wilson
10. Sonya Deville
11. Liv Morgan
12. Molly Holly
13. Lana
14. Michelle McCool
15. Ruby Riott
16. Vickie Guerrero
17. Carmella
18. Natalya
19. Kelly Kelly
20. Naomi
21. Jacqueline
22. Nia Jax
23. Ember Moon
24. Beth Phoenix
25. Asuka
26. Mickie James
27. Nikki Bella
28. Brie Bella
29. Bayley
30. Trish Stratus