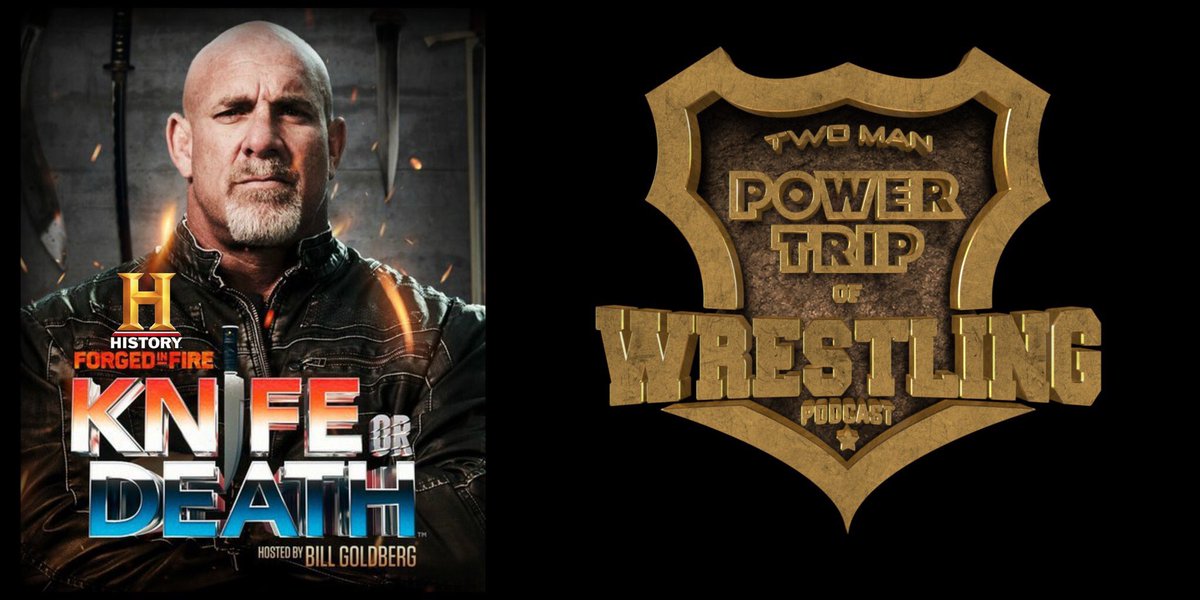 He is quite simply THE MAN! He is a newly minted 2018 WWE Hall of Famer and former WWE and WCW World Heavyweight Champion, Bill Goldberg and he is now joining The Two Man Power Trip of Wrestling. Joining Chad and John Poz to discuss his new History Channel show Forged In Fire: Knife or Death, Goldberg breaks down the unique and exciting nature of this project and how impressed he has been with the skills and the precision of all of the participants of the show thus far. Goldberg also comments on his WWE Hall of Fame Induction as well as his last run in the WWE, which saw him win the WWE Universal Championship and show that he is still a force within sports entertainment. The full episode can be downloaded at this link.

Goldberg On His WWE Hall Of Fame Induction Speech:

Goldberg On His Last Run As WWE Champion And Return To WWE:

"It is something that is not out of the norm for me taking on things that I am not an expert at and try to sound like I know what I am talking about. It has given me a great opportunity to learn about something that I am not an expert at like I said. I kind of feed off of the people that are around me, the weapons expert and the blade expert and we've kind of got the best of everybody in each given discipline and I try to tie it all together with a little bit of excitement and heck, my wife is a blacksmith and now I can have a conversation with my wife about forging knives. If I don't gain anything at least I can talk at the dinner table coherently with my wife about that process."


What made him want to join this show:

"Part of me as a human being likes a challenge and it is something that wasn't in my wheelhouse at the beginning but in a sense it was in that I have an extensive knowledge of the martial arts with body movement and a physical application when it comes to violence or violent acts, I think I have a little bit of experience there and it is a really cool format."


What viewers can expect every week:

“It is not only a history lesson but it is visually spectacular like the Ninja Warriors is. You get your elements of back story and knowledge about the blade and forging and you get the violent act and the real time aspect of people running through a competition with two "type A" alpha males commentating on it in real time and showing their natural reaction. I think it is a pretty cool combination of a lot of things to make it work and like my wrestling career it is dependent upon a lot of moving parts and whether it is the guy who creates it, the guys who present it or the guys who film it or ultimately the people that run the course it is a team effort. It is a lot of fun being a part of that team."


Looking back at his last run as WWE Champion and return to the company:

“It is the most special thing that I have ever been afforded in my entire life. It was and again because of a lot of other people other than myself and I just was cast in the spot to be able to hopefully pull it off. My success was not dependent upon my own performance and it was again a symphony of people making it happen and I am just lucky to have gotten that opportunity. I am appreciative that I worked my ass off and that I made it happen and that everything fell in the right place but like me beating Hogan in front of 45,000 people in Atlanta I was in the right place at the right time. I am an extremely lucky human being to have been afforded the opportunities that I have had in the past and that I am able to twelve years removed from the business go back and do what I did as a father along with just being a normal human, I am one of the luckiest guys in the world. You can understand and millions upon millions of guys can understand the situation that I was in and that I am in everyday being a father. To get that opportunity to basically be on a rocket and shot to stardom again in front of your eyes of your son in real time. How can you write it any better than that?"


Did he feel his Hall of Fame induction was the pinnacle of his career:

“Yes and no. It's bitter sweet. I'll start with the yes in that I was extremely and will always be forever honored to the people who chose me to be a member of the Hall of Fame period end of story. The people that I rubbed shoulders with in that hall I don't deserve to be there by any stretch but did I enjoy being last when half the people left because of a six hour ceremony when people go on and on and on and unfairly try to encapsulate their five to thirty five to forty years in the business? It was an unfair and unceremoniously strange send off because it is just tough. You try to be professional in consideration for others and I'm not saying that the others were inconsiderate because they deserve their time and you deserve to sit out there and talk for an hour and make people understand how appreciative you are of the accolade and induction and the stories that encapsulate your career. It's an injustice for people to not hear those things. But at the same time it makes for an extremely excruciating experience (laughing) sitting out in that crowd. Even more excruciating for someone that has to follow them and capture their career in a short period of time which is what I tried to do and hell, I forgot about Sting and he was sitting in the front row thank God and I forgot about a million people because I didn't have time. I gave my suggestions to Mr. McMahon afterwards and than you carry on to the next night and you carry onto Mania where you are introduced and I was out of there like a hot potato because as long as I am physically able and as I've said have the ability to do the things that I used to do, I'm not saying I want to be out there doing it but its tough being around. It is like being in pads and sitting on the side lines waiting for the coach to put you in but you can't because you are ineligible. It's just that I am a competitive person and it is tough to sit back and watch people do it whether it is wrestling or anything else. That transition that is kind of forcefully retire when you get this Hall of Fame induction I am just kind of uncomfortable with that whole situation. I am still walking tall."