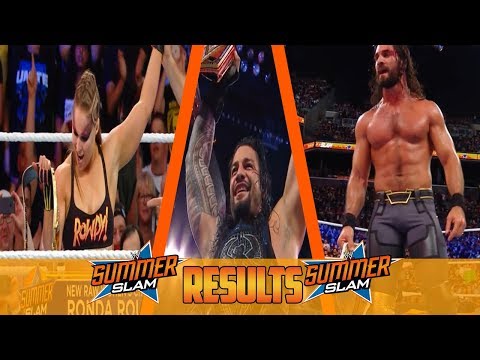 SummerSlam 2018 Kickoff
1. Andrade ‘Cien’ Almas and Zelina Vega defeated Rusev and Lana. Lana was distracted by Almas, allowing Vega to roll her up and use the ropes for leverage to get the win.
2. Cruiserweight Championship Match: Cedric Alexander (c) defeated Drew Gulak.Alexander retained his championship after a series of roll-ups.
3. Raw Tag Team Championship Match: The B-Team (c) defeated The Revival. Curtis Axel won the match for The B-Team by accidentally countering a small package when Bo Dallas fell into him.

SummerSlam 2018 Results:
1. Intercontinental Championship Match: Seth Rollins defeated Dolph Ziggler (c). Dean Ambrose and Drew McIntyre were at ringside. Rollins connected with a superkick and hit the curb stomp to win the match and become the new Intercontinental Champion.
2. Smackdown Tag Team Championship Match: The New Day defeated The Bludgeon Brothers (c) by disqualification when Rowan used his hammer on Big E. No title change.
3. Money in the Bank Briefcase Match: Braun Strowman defeated Kevin Owens. Strowman won easily with a chokeslam on the ramp and a running powerslam.
4. Triple Threat Match for the Smackdown Women’s Championship: Charlotte Flair defeated Carmella (c) and Becky Lynch. Flair hit Lynch with Natural Selection while Carmella was in the Disarmher to win the match and her seventh championship. After the match, Lynch and Flair hugged before Lynch smacked her in the face and beat her down. Loud cheers for Lynch, loud boos and “you deserve it” chants for Flair.
5. WWE Championship Match: Samoa Joe defeated AJ Styles by disqualification Joe repeatedly harassed Styles’ wife in the crowd until Styles snapped and attacked him with a chair. No title change.
– Elias was going to sing a song, but then his guitar was broken so he didn’t.
6. The Miz defeated Daniel Bryan. Maryse was in the front row and slipped her husband a pair of brass knuckles. Bryan attempted a dive, but Miz punched him in the face and knocked him out.
7. Finn Bálor defeated Constable Corbin.Bálor brought back The Demon and squashed Corbin in short order.
8. United States Championship Match: Shinsuke Nakamura (c) defeated Jeff Hardy.Hardy attempted a Swanton Bomb from the top of a ring post to the apron, but Nakamura moved. Nak was able to finish him off with a Kinshasa. After the match, Randy Orton showed up and did nothing.
9. Raw Women’s Championship Match: Ronda Rousey defeated Alexa Bliss (c).Rousey easily destroyed Bliss and won with an armbar to win her first WWE Championship. After the match, she celebrated with her husband — UFC heavyweight Travis Browne — Natalya, and the Bella Twins.
10. Universal Championship Match: Roman Reigns defeated Brock Lesnar (c). Before the match, Braun Strowman announced he’d be cashing in his Money in the Bank briefcase against the winner. During the match, Lesnar attacked Strowman and threw away the briefcase. Reigns then won with a spear to become Universal Champion. No cash in.