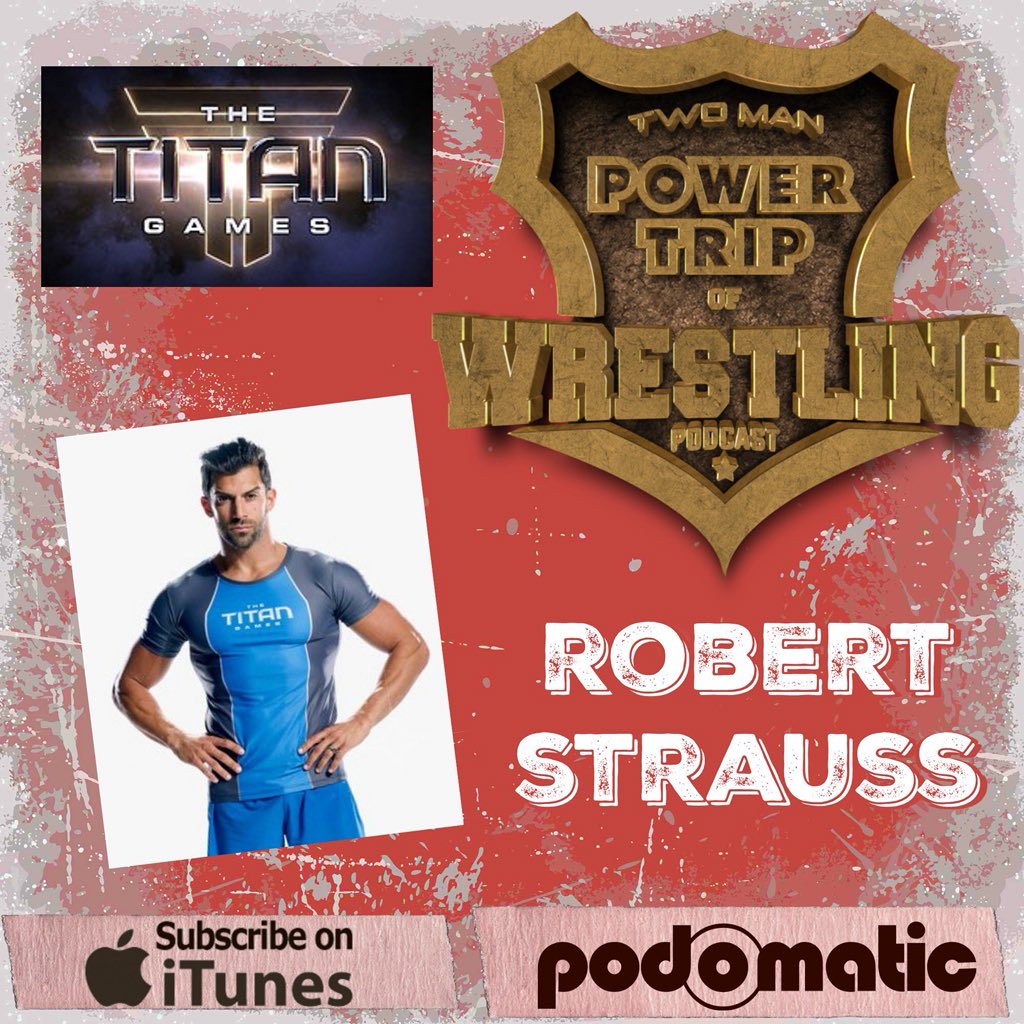 In this Two Man Power Trip of Wrestling feature episode #5 we welcome back a great friend of the show and now contestant on NBC's The Titan Games with The Rock, Robert Strauss (FKA Robbie E.). Giving a full update on his wrestling future as well as his recent rebranding of his persona, Robert holds nothing back as he tries to squeeze all of the projects he's got going on into this feature episode as well as prepare for NBC's new Titan Games reality show. The full episode can be downloaded at this link.

"Everyone is on social media now posting all of this positive crap pretending that they are this motivational person and they are basically lying because not everyone's lives are that good but they pretend that they are on social media. So I said let me be that guy and let me tell everyone that my life is so great and how they can change theirs and be kind of like a Gary Vee or Tony Robbins kind of guy. So I got the head piece, the crazy glasses and I can help you change your life but all I really want to do is steal your money."


Being featured on NBC's Titan Games:

"I'm always willing to do and try different things and randomly I got reached out to by the casting of The Titan Games. They saw some of my "Dad-bod Destroyer" videos that I used to do on Muscle and Fitness and it shows you how strong the world of social media is that anything can happen and they thought they were hilarious and they liked that I was a twin-Dad so we had a phone call and the next thing I knew I was on a plane to LA for the final fitness challenge. There were about 120 of us and out of those they chose about half for the cast and I got it. The crazy thing is The Rock originally said over 80,000 now he's saying over 100,000 people applied to be on the show so it is like one of the most tried out for reality shows in history so just making it on to it is a huge accomplishment in itself."


Interactions with The Rock:

"He is the host and creator of the show. He was busy and he had a lot going on in his mind and it’s a million things. His dressing room was on the other side but I did have to film stuff with him because he is the host so in our down time we got to BS a little bit about wrestling and stuff. I dropped some names of guys I'd figure he would know that I know and laughed a few times. He was approachable, he was positive and he really is a good guy."


Recent NXT tryout:
"I knew going into it I was going to be treated as an equal meaning that I have all this experience but I was going to be with guys with no experience and who are former NFL players and pro athletes so I went into it obviously level headed and did whatever I had to do and it was rough. It is hard to go back and run the ropes and do basic bumps and stuff that you learn and I learned over eighteen years ago and you have to do it again like the beginner way. Not to mention I had to push myself cardio wise to do all of these crazy fitness things we were doing but I kept up, I was the oldest person there at 34 and now I'm 35 and I was the smallest person there also so again it was like all odds against me but I hung in there and did really well. WWE is obviously my ultimate goal and where I would like to end up so I was proud of how good I did, the basic thought was that I did well so I guess we will see in 2019."


Going through the tryout process as a veteran:

“It is the process. Not everyone and clearly not everyone and obviously they bring guys right to NXT but there has been a lot of experienced guys that have still had to go through these try-outs. Again, I'm level headed and there is no ego in wrestling. It doesn't matter if you've been wrestling a day or forty years anybody at any time can make it as a star so you have to go into it like that. It was an opportunity and I made the best of it and I didn't mind going through the process."