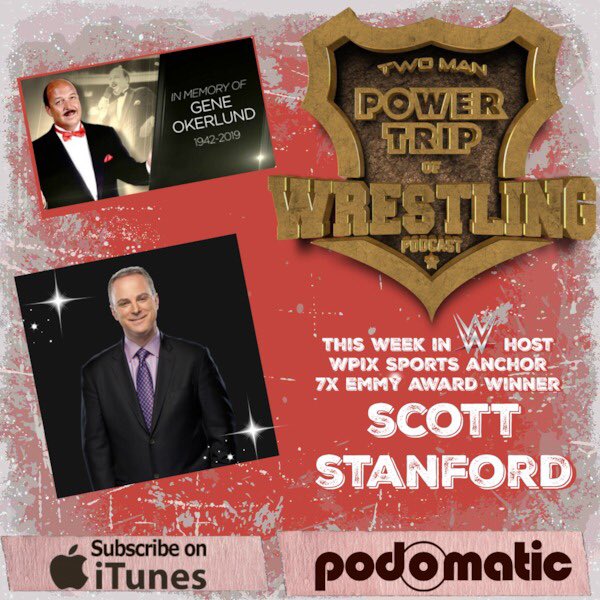 In the 6th installment of The Two Man Power Trip of Wrestling’s feature series we pay tribute to the late great WWE Hall of Famer, "Mean" Gene Okerlund. Joining us for this episode to look back at Mean Gene's career is WWE Network Host and WPIX Sports Anchor, Scott Stanford. Scott is no stranger to Mean Gene having worked with him in WWE television production as well as being a long time fan of Gene's work during the golden era of professional wrestling. In this excerpt from the podcast, Stanford recalls his memories of growing up as a fan of Mean Gene as well as the reaction at the WWE television studio when the news broke of Gene’s passing. The full episode is available for download at this link.


Scott Stanford Remembers "Mean” Gene Okerlund: "He Was Just As Big As the Superstars":

"Mean Gene was my idol and when it came down yesterday morning I was actually at WWE and I walked into one of the Executive's office just to say Happy New Year and how have you been and he just got the text that said Gene had passed away. So as I was walking in he just looked up at me and said that Gene Okerlund just died or he passed away last night and they just found out and it was just one of those things where when you hear someone that you know or someone that you are in love with (dies) and you just get that frozen or you freeze in your tracks and you have to process it for a second and when I realized what he had said I was just like you've got to be kidding me and this wave of depression comes over your body. I had just seen Mean Gene about a month ago because he'd come up to Stamford about once a month because he was shooting a show called "Vintage" that airs on the WWE Network with Charly Caruso and the last couple of times he showed up he wasn't feeling well, he didn't look well and we all knew that he didn't look great and had a lot of problems standing up and problems with his legs. Just to hear what happened really put a damper on everything everyone was doing in the studio yesterday because believe me from the security guard at the door to the last producer he is just beloved by everyone."

"There was no better broadcaster/interviewer than Mean Gene. I was explaining it to somebody yesterday at PIX 11 as to what made this guy so special and if he said your name he made you sound like a superstar and the one thing at WWE is when you are an interviewer your job is to put the talent over and make them look bigger than they are and when Gene Okerlund said your name it was almost like putting your name in lights on a marquee. Growing up like you guys said in the mid-80s I was in high school and college watching him do his thing and I would imitate Mean Gene with any microphone I could find."

"He was great. As big as he was all over the world and anytime you needed him to do something he was there. The guy did not have an ego about him, the nicest guy in the world. I remember when we were doing Zach Ryder's "Z True Long Island Story" and we were doing bits and pieces I'd grab Gene at the studio a couple of times to do things for us and I just remember the first time I met him was WrestleMania 27 or 28 in Miami and I walked into the greenroom and just saw him sitting there on a couch and I plopped down next to him and said Mean Gene, you've been my hero since I was a kid and we hit it off ever since."