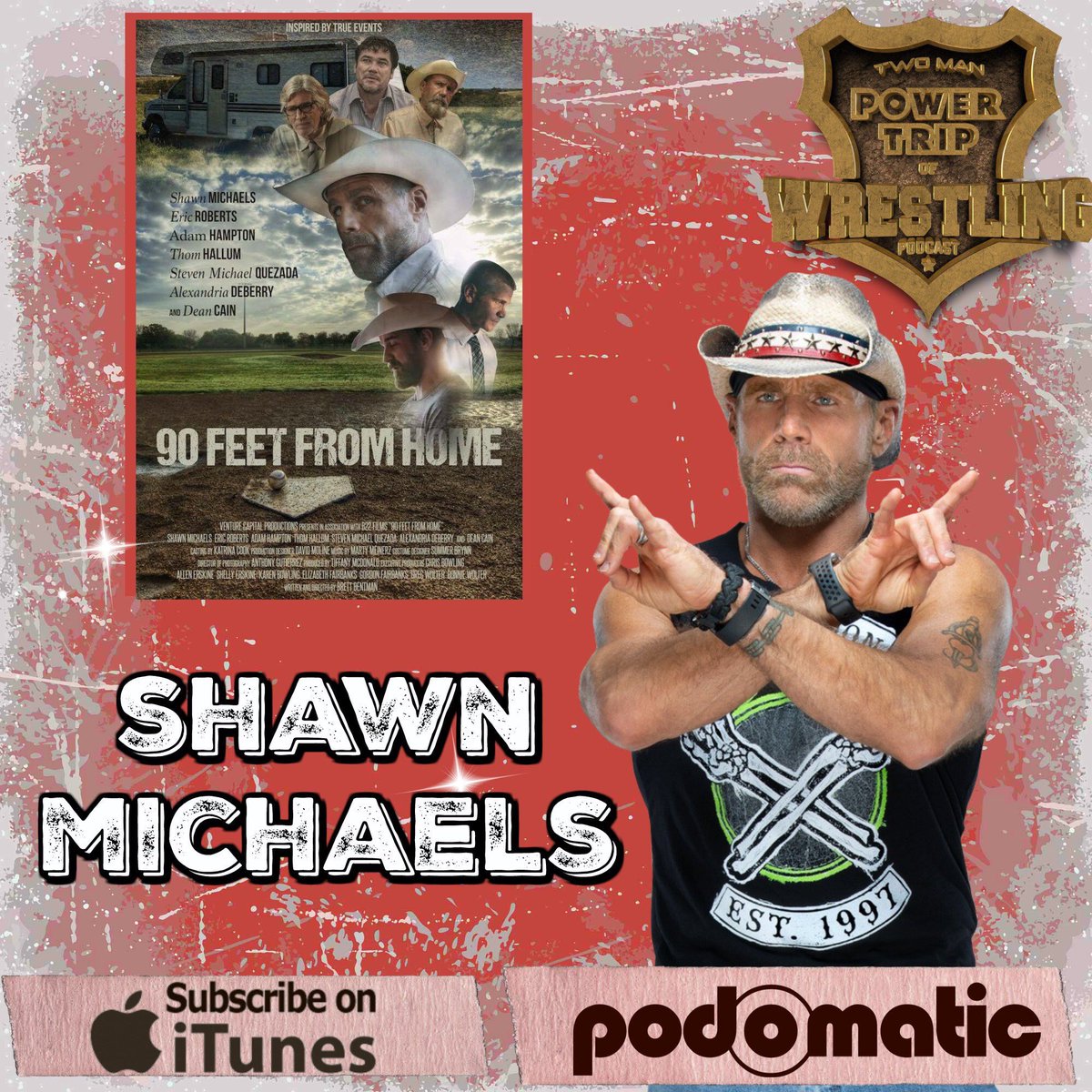 In the 11th installment of the Two Man Power Trip of Wrestling's FEATURE SERIES we welcome WWE Hall of Famer, "The Showstopper", "Mr. WrestleMania" and Former WWE World Champion, "The Heartbreak Kid" Shawn Michaels. HBK is making his TMPToW debut to promote his role in the film "90 Feet From Home" where Michaels tackles a very serious part playing an abusive and alcoholic father of a former Major League Baseball player. The film also stars screen veterans Dean Cain and Eric Roberts. In addition to discussing the movie, HBK also discusses his current job in NXT as a trainer and how important it is to have one of the top stars of the late 1990s and 2000s prepare the next generation of superstars for in ring success. The full episode can be downloaded at this link:

Find out more about 90 Feet From Home by visiting: https://www.facebook.com/90FeetFromHomeMovie/


Shawn Michaels On His Role At The WWE Performance Center:

"It was very different and way out of my wheelhouse and kind of my comfort zone and especially now. I've mentioned in a few of these interviews and of course those who are familiar with my wrestling career and even the bad guy version of me there was still a little bit of fun and some charm and almost a "Dennis The Menace" quality to the bad guy version of me and this was totally different than anything that I've ever done. It was clearly evil and a great deal of hatred and dysfunction and honestly, that was the most intimidating part of all of this and especially now at this point in my life. I am a relatively happy-go-lucky 53 year old man so the later version of Jimmy Devine I felt was something that I would be more comfortable with but the early version with the violence and abuse and honestly the hatred and vitriol that this character has was something that I don't know if I've ever even at my worst had maybe quite that bad. So that was the most challenging part and through this experience trying to create that was a bit of an uncomfortable process I'd have to admit."


Channeling a non-traditional role as an abusive step-father:

"The one thing that I guess helps me is that there is a yin and a yang to everything. For humility and all of those things there is evil, there is hate, there is pride and I really don't think you can appreciate the one truly unless you have a real understanding of the other so from that standpoint I was certainly at peace within myself of doing the role but honestly the challenge was knowing and wondering if I could commit to going there in a very uninhibited no hold barred way. I was very concerned because I know you bring out qualities that even if they are in all of us, a majority of us work all of our lives to get away from those and keep them under wraps and secure them in a little lock box in our heart or our mind or something and you work very hard to not allow them to get out until a time when you are supposed to. It is a bit kind of strange but I've told everybody that I certainly don't have the experience to be able to turn something like that on and off and it is a switch where I haven't been acting long enough to manufacture that on command. For me it was a process of trying to get there and allow yourself to engage in this side of you that you have really have never been in touch with and certainly those areas that you have at one time in your life you've tried to distance yourself so far from that it is kind of strange to want to allow yourself to willingly go there."

"What they've got going on there is so phenomenal. I've got to be honest it doesn't matter what respectfully the kind of credentials you've got coming in. You've got the most important thing one needs to understand about working for the Performance Center and NXT is you want to add to what is already a part of a phenomenal system and you notice it as soon as you come through the door. That is something that kicks you right in the face when you come in and that was honestly the most important thing that I expressed with Hunter and Matt is my goodness what you've guys got here is really great and I'd love to be a part of this but only if I can enhance it and make it better and can add to what was already a fluid and efficient system.”


How does he feel he has fit in so far?

“A lot of that is just trying to find you place and again because they've got so much covered you start to look at it as where can I help the most. I hope I've been able to do that and it has been a sheer joy to be a part of it and a great learning experience for me, which is one of the things that I strangely enough said to everyone when I got there was that I really feel like if I am to do well here I will learn as much as I'd hope to be teaching and I really do think that has happened. I am hoping that the product has and will continue to get better with all of the people that we are adding (myself included) but it's exciting for me because at this stage of your life learning other aspects of the wrestling business a business that I have loved since I was 12 is pretty special. You don't always imagine yourself at 53 years old being in the same line of work that you've been in since you were 19 and still learning different aspects of it. To do that with your buddies and of course with a bunch of talent that is a joy to work with and clearly makes it easy when it is a generation that grew up with me and Road Dog and Hunter so right now I feel like it is something that works for all of us in a positive way.”


Is Bret Hart his greatest opponent?

"I think everyone would be certainly say on paper and you look at Bret and I and say I guess it is no stretch that they had chemistry but still every now and then you run into somebody that does have as much talent but isn't quite there and fortunately Bret and I knew that the first time we ever got in the ring together I think in a tag team. It is one of those things that you do and it only takes a couple of touches of one another and you know that okay there is something special here. You find little ways to know that it is going to come to fruition in an even better way and a more positive way in the future and again that is something that Bret and I had and I had that with Jericho and I was fortunate enough to have that with a decent amount of guys but when you put together certainly the ability of a Bret Hart and you know I certainly feel like I had the capability too and then you have that chemistry with each other it is a pretty tough combination to beat."