The @TwoManPowerTrip's HUGE Episode 400 has arrived and features the return of The Enforcer Arn Anderson! Double A gives us an EXCLUSIVE look at his post WWE life and what's next 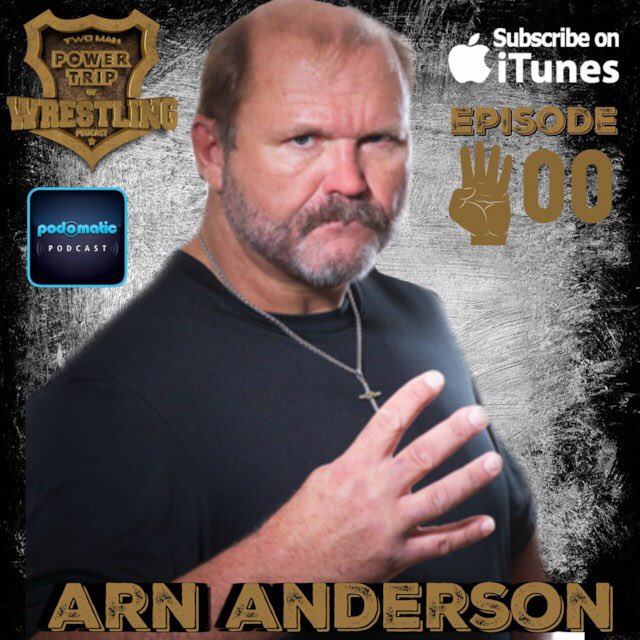 Celebrating their 400th episode in a major way, The Two Man Power Trip of Wrestling welcomes WWE Hall of Famer and founding member of the Four Horseman, "The Enforcer" Arn Anderson. In one of his only interviews since departing the WWE in March, Double A takes to the airwaves to give Chad and John the lowdown on his post WWE career and what may be next for what could be the final chapter in his 37 year career. The full episode can be downloaded at this link.


Arn Anderson On His Future In Wrestling: "Right Now I Am Legally Bound To WWE":


The impact of AEW’s Double or Nothing:

"I was in Vegas. I was there. I was in the green room when the AEW guys were all in there talking about this and that and the other and you could just see the excitement on these kids faces and you could see the leadership roles taken up by Cody Rhodes. Cody was just a kid and I've known Cody since before he was born and to see him in that role and in this company which does remind me of JCP (Jim Crockett Promotions) from back in the day because everyone is so excited to go out and perform for the audience. If you don't feel good about what is going on with AEW and the impact it has had on the business you are a fool and that's it."


The vibe of the environment:

"I wasn't at the show. I was there doing some signings and I did a stage show that I did with Tony Schiavone (which was absolutely awesome) and I didn't go to the show because I didn't want anybody coming up because make no mistake about it, I do not work for AEW, we haven't had that discussion as of yet and not to say I wouldn't be honored somewhere down the road to be offered a position with those guys, we just haven't had that conversation because quite frankly, I am legally bound to a non-disclosure agreement and for a few more months I am going to be still on a severance package. I can't talk to anybody about anything as far as going forward but with that being said I was so excited for them that I might as well have been working for them because I was pulling for them every step of the way and they paid it off."


Does Cody remind him of Dusty at all:

"I think he is easy to be around as was Dusty. Dusty Rhodes was a huge star and to this day I am star-struck even thinking about him much less being in his presence and I think Cody has star quality, I think he has quality of the heart and that he has matured and he is going to take those things that his Dad taught him before he passed and they are going to become something meaningful now whereas they were just words at the time. I think he is going to go back re-think about the life lessons that he got from his Dad and from his older brother to be honest with you. Dustin Rhodes is very mature in this business and he is a very smart man and he came up in a rough way and let me put it to you this way; when you are Dusty Rhodes' kid it is a horrible shadow to step in to, number two you've already got heat because your Dad is the booker and people think you are getting a free ride. Well, he didn’t get a free ride the kid earned his way along and he became really good and it is going to pay off for him and it is going to pay off for Cody but do I think that either one of them want to be their Dad or want to be like their Dad? Not necessarily. They both want to be their own men and they are being their own men and I am proud of both of them."

"Awesome. That was special. The people remember and you can go back to it if you do it in a tasteful way whether it is being negative or positive and addressing something that someone said, a promo that stuck through time and to go back to that people will know exactly what you are talking about and those that ask, somebody will be glad to tell them and I think that's the part of the industry that has been missing the last ten or fifth teen years for sure the last five and it is building something that lasts. Other than putting television on the air because you are financially obligated to a network and they are paying you a lot of money, put something out there that people would rather remember and put something out there where they are going to feel something about one way or the other and that is going to have a memory that lasts for twenty years."