Today's @TwoManPowerTrip podcast welcomes back #WWE Superstar @reymysterio. We are joining Rey in his Fight 4 Autism and hope you do too after listening to this in depth interview. 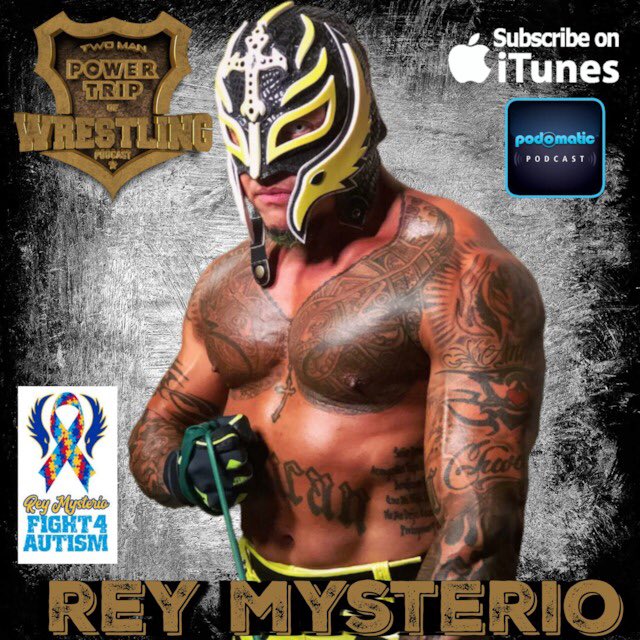 This past week, The Two Man Power Trip of Wrestling welcomed WWE Superstar Rey Mysterio back to the podcast to discuss his #ReysFight4Autism fundraiser. In this exclusive interview, the former WWE United States Champion gives a pivotal status update on the injury that led to him relinquishing the title near the top of his own personal bucket list as well as when we may see the return to action of one wrestling’s great ambassadors. To donate to Rey’s Fight 4 Autism please visit www.withwithrey.com. The full episode can be downloaded at this link:

"I suffered a recent injury at "Money in the Bank" versus Samoa Joe. Unfortunate for me because it was a big step moving forward and especially at this stage in my career at being able to capture one of the last titles that was set on my bucket list (The United States Championship) and again very important that I had a separated left shoulder and that put me out of circulation and I've been out four weeks now. The separation and bruised AC joint which the Doctor had predicted anywhere from four to six weeks and of course four weeks closed out from my injury and my recovery is about 80% as we speak so I am hoping that in the next two weeks I can gain that other thirty that I have left and be back in the ring by the month of July.”


Winning the US Championship and becoming a Grand Slam Champion in WWE:

"It was an incredible moment. I knew going into that match if I was able to capture that title I would become another member of the Grand Slam winners so obviously I was very stoked about it at the time but after I saw the replay of the match and how I pinned Samoa Joe and especially seeing that his left shoulder was up from the mat when the referee counted to three it kind of gave me a sour taste. Definitely not the way I wanted to win the title and I think all of my victories have been clean and there hasn't been any bad feedback from my opponent when I beat them rightfully so this definitely gave me a sour taste. I want to come back and the first thing that I want to do as soon as I come back is get another title shot and be able to prove that I am worthy of becoming the United States Champion."

"I have utmost respect for Samoa Joe. He is a tough dude in every sense of the word because you see the aspect of him in the ring and you know that is a guy you don't want to mess with and that is exactly how he is in the ring. He is snug, he is tough, he is hard, he's strong and I've always been considered the underdog and even before I became a professional wrestler, always in wrestling school I was the smallest kid in the class and that is how I raised. I was raised to always be in there with bigger guys so one thing I have to say is whether it is Joe or anybody else it doesn’t scare me in the fact that I've always been the smallest one but I know I can bring it when it is time to bring it.


Perfecting his role as the ultimate underdog:

“The amount of guys that I worked with throughout my career in the U.S and Mexico as well because in Mexico even though the wrestlers aren't as big as they are here. in the States, I was always considered the smaller one in the ring. I've always had a size disadvantage but the amount of guys that I worked with and have learned along the way it is incredible you know like the Eddie's (Guerrero) Benoit, Jericho, Kurt Angle, The Undertaker and even Triple H it has been a variety of talent that I've been able to face throughout my thirty years that I've been very blessed and have learned so much just being in the ring against them or teaming up with some of these superstars."