The @TwoManPowerTrip feature ep 25 is all about @MLW 's FIGHTLAND event this Saturday night in Philly. The most talked about star in wrestling @realKILLERkross pulls no punches about his #MLW debut & sets the record straight on his future 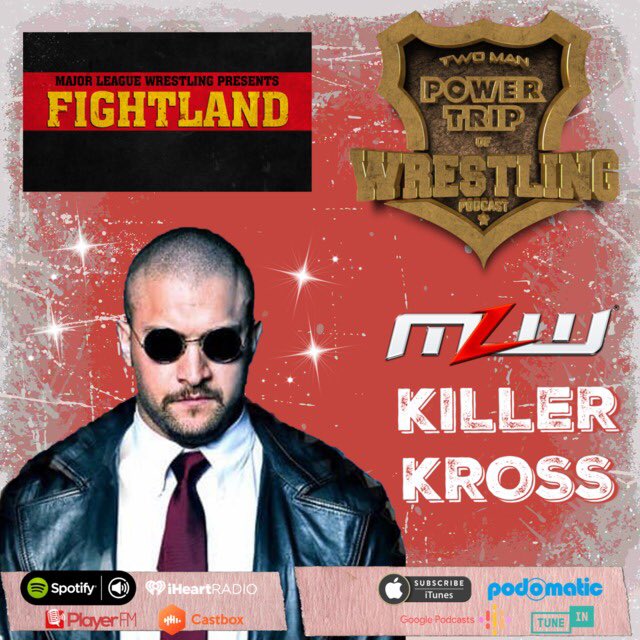 Today TMPT Empire Feature Episode #25 highlights MLW's upcoming FIGHTLAND event taking place this Saturday night (February 1st) at the 2300 Arena in Philadelphia and we are joined by special guest, Killer Kross. Kross, perhaps pro wrestling's most talked about up and coming star is set to do battle with "Filthy" Tom Lawlor at FIGHTLAND but is also getting set to make his MLW debut in the legendary Philly venue. With all the discussion about whether Kross will be signing somewhere long term, in this excerpt he addresses the worldwide speculation of wrestling fans and sets the record straight for wrestling journalists who have reported details about his future. The full episode can be downloaded at this link.

"MLW has had a lot of momentum due to the level of commitment that everyone has from A to Z on making it the best show possible and people come to see it. Getting on board with a roster and team like that is paramount to finding your own individual success in this industry so I'm very happy to be on board so to speak."


Debuting at the 2300 Arena as part of the FIGHTLAND event:

"I know that building very well and I know Philly very well. I've beaten up a lot of people and broken a lot of bones inside human bodies in that place and everybody knows, and everybody remembers so it will be like coming home."

"I don't think they could have picked a better person for me to be in the ring with in order for the both of us to showcase our wheelhouse of talent so to speak. Tom is a shooter, is a professional mixed martial arts fighter and he's an excellent professional wrestler and I think that people are going to get something very special out of both of us that night."


Speculation that he has met with Triple H:

"I have to address this. You had mentioned Hunter or “Triple H”. I've never met him. I don't know where the story came up exactly first in the dirt sheets and I don't really pay that much attention to them, but I've never met him. I think it's cool and kind of flattering that those stories circulate but I'd like to meet him. If someone could make that happen that would be great."

"I know it's not meant to be malicious or whatnot and it's fun to fantasize about that stuff but unfortunately that hasn't happened yet."


The numerous reports about his future:

"I'll tell you too and you don't have to read a dirt sheet. I'll just tell you the truth and if any of them had asked me this I would have told them this as well. I don't know where I am going to end up yet and that doesn't bother me, and it shouldn't bother anyone else. This is a huge decision. This is a life changing decision and I enjoy the idea of commitment so when I make the decision on which direction I am going to go in, I need to be 100% committed in my mind and I need to have everything to lay as it should be and I understand the speculation that people are making and it doesn't bother me and it's cool. What's wrong with being the subject of conversation in the pro wrestling industry? I'm flattered by it and I am humbled by it, but the truth of the matter is I don't know where I am going next. I have ideas and I am in conversations with many different channels but there is such a massive amount of embellishment out there that sometimes I feel bad reading it, but I'll just mind my own business and be over here."

"I feel bad because if they are paying that source, somebody is probably making a pretty penny off it and the source is wrong. I don't know how all that stuff works but I don't take any offense to it and I don't mean to be challenging for anybody but the truth of it is that I'm still observing my options and a decision like this is something I really need to weigh in on."


Since debuting in January 2015 and named one of RollingStone.com’s “18 Pro Wrestling Podcasts To Follow”, The Two Man Power Trip of Wrestling has become a strong content provider in the podcast medium. Hosts John and Chad conduct the most in-depth interviews in the entire genre of Professional Wrestling. TMPT also co-hosts podcasts with ECW Legends, “The Franchise” Shane Douglas: Triple Threat Podcast and “The Queen of Extreme Francine’s “Eyes Up Here”, " Taking You To School With Dr. Tom" as well as “JJ: The JJ Dillon Podcast”. Follow @TwoManPowerTrip @ChadIanB & @The3ThreatPod on Twitter for Episode Previews and Show Coverage. Subscribe on YouTube for Interview Highlights and BEST OF Clips.